What is a Secondary Cataract and How to Treat It 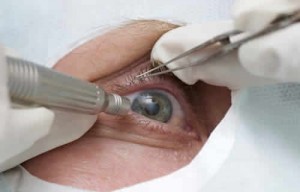 Cataract surgery is performed on millions of Americans each year and is a relatively successful operation. Of the 3 million Americans who have cataract surgery every year, nearly 98% of them report the operation as successful. And while only 0.05% of people report postoperative complications, they do occur. The most common complication is what is known as a secondary cataract.

What is a Cataract?

A cataract is basically a clouding of the eye’s lens that impairs vision and causes sight problems. Statistics show that more than half of Americans older than 65 have cataracts. While they are generally caused by aging, cataracts can also result from medical conditions like diabetes, exposure to radiation, trauma, and more. Symptoms include blurred vision, nearsightedness, double vision, and other vision changes. The most common treatment option is surgery. The surgery consists of the doctor removing the lens and replacing it with an artificial lens.

What is a Secondary Cataract?

Simply put, a secondary cataract is a complication resulting from the original surgery to remove a cataract. As mentioned earlier, it is a rather rare complication and most people never experience difficulties.

Secondary cataracts can pop at any given time after surgery. Some people will go years without developing a secondary cataract, and others will notice signs of it just a few weeks after the initial surgery. The symptom timeline is unique to the individual and can vary quite drastically.

A secondary cataract is basically a scarring of the eye’s lens capsule. The lens capsule is left in place when the cataract is removed and can be prone to scarring after surgery. This scarring can be the result of cells within the eye growing on the capsule and distorting vision. People with secondary cataracts usually notice similar symptoms to their first cataract. In some situations, people report worse vision that before the original surgery.

How to Treat It

If a doctor suspects a patient may have a secondary cataract, a diagnostic test will be conducted. This will confirm whether the change in vision is the result of a secondary cataract. The treatment is usually considered very easy. Eye doctors use lasers to remove the lens capsule and reduce the blurriness and other symptoms.

The laser treatment is performed in just a few easy steps. The doctor begins by first dilating the eyes with eye drops. The doctor then removes the clouded capsule from the line of sight. This is done without making any incisions or cuts. In fact, the eye is never touched. Eye drops are then given to the patient to reduce inflammation and the procedure is over. It takes only a few minutes and is completely painless.