How to Beat The Famous Smokers Cough With Electronic Cigarettes 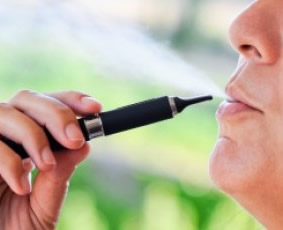 Smokers cough is something that is familiar to most of us whether personally experienced or heard from being around a smoker. Smokers cough is a persistent cough that develops in long-term heavy smokers. It can last for 2-3 weeks where it starts as a dry cough and progresses to produce phlegm. Smokers cough is usually worst during day-break when a smoker wakes up and becomes better as the day progresses.

Our lungs are lined with tiny hair-like cells which are referred to as cilia. The responsibility of these cells is to trap toxins inhaled alongside air and then move them upwards towards the mouth for expulsion. Tobacco smoke renders the cilia inactive and as such causes the toxins found in cigarettes to make their way into the lungs. A build up of these toxins causes an inflammation within the lungs and forces the body to expel the toxins which normally results in a cough. At night the cilia are no longer being exposed to tobacco smoke and therefore they begin to regenerate. After regeneration, the cilia proceed to catch and remove the accumulated toxins hence the reason why a smokers cough is at its worst upon waking up in the morning.

How E-cigs Combat The Cough

After quitting tobacco cigarettes, the smokers cough almost always improves with time. However before that happens the cough may actually become worse. Most smokers who decide to quit tobacco smoke often experience what is referred to as, “smoking cessation cough” which is worse than the smokers cough. This however is no reason to panic as it is as a direct result of the repaired cilia simply doing their job by removing foreign materials from the airways, throat, and trachea thereby causing the lungs to become healthier.

Fiona Atchison is a freelance writer with vast knowledge on cigarette smoking and the various smoking cessation products. If you are thinking of making the switch to electronic cigarettes, Fiona suggests you give ECIG123 a try.

2014-07-21
Hicham RK
Share
Previous How To Wash Your Windows Safely
Next Who Pays For Car Damage After An Accident?