Home / Tech / Major Electrical Issues That Could Damage Your Equipment

Major Electrical Issues That Could Damage Your Equipment 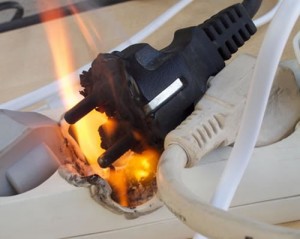 Did you know that most homes that were built before 1990 have old wiring? So, it is not surprising that the old wiring systems are incapable of carrying or handling the slew of modern day technological gadgets. The demands on energy by man has doubled or even tripled in the last decade, thanks to the explosive propagation of portable handheld devices like tablets, smartphones, and other devices.

Usually, when people have frequent electrical problems, they tend to think that the problem is from outside the house. A recent study conducted by the Electric Power Research Institute (EPRI) has proven otherwise. According to the results of the study, about 80% of all power disturbances and disruptions originate from inside the home.

The remaining 20% goes to natural phenomena like lightning, storms, hurricanes, falling trees, birds and animals. Some of the common gadgets and devices responsible for the electrical issues you have in your home include those that primarily work using motors and/or compressors. These appliances tend to stop intermittently and start during their typical cycles.

Some examples of these appliances include refrigerators, the central cooling and heating systems, pumps, washing machines, fans, pressing irons, thermostats, blenders, vacuum cleaners, air cleaners, and juicers. All these appliances are major causes of electrical problems in the home.

When these disturbances and problems persist, they are likely to either outright destroy your appliances or cause them to deteriorate slowly. So, whether it is the latter or the former, one thing is sure: electrical problems can render your machines useless, and in some extreme cases, trigger fires or explosions in the home.

Now, that you know the appliances responsible for the electrical issues and what they can do to your gadgets, it is time to find out what the particular problems are and the solutions to the problems.

The difference between these two is the duration of each disturbance. For instance, spikes are caused by brief energy bursts that can last between 1-5 seconds. Surges, on the other hand, are bursts of voltage that typically last longer than 10 seconds.

In each instance, all it takes for these problems to damage your appliances are just a few seconds. Surges and spikes can both be triggered by external and internal factors. It could be electrical or typical storms and lightning, or it could be something as simple as turning off appliances such as your refrigerator or thermostat.

The major appliances that are susceptible to damage during an electrical surge or spike include the home security system, TV, extension boxes, PCs, home theatre and entertainment systems, gaming consoles, microwaves, light bulbs and DVDs.

Power outages are pretty self-explanatory: these are periods when there’s total blackout in the house. This could be caused by storms, hurricanes, short circuits within the home, problems at the power grid or by the homeowner’s inability to pay his energy bills.

Dips and sags are temporary low voltage problems that can last from a few seconds to hours, depending on the cause and efforts to remedy the situation. Power drops and sags can be caused by suddenly turning on a power guzzling machine or appliance in the house. All three electrical problems can result in damages to your appliances, smartphones, faxing machines and computers.

What Can You Do to Fix the Problems?

The good thing is there are steps you can take to minimize or even completely prevent the damage from these electrical problems. These include :

Oscar King is an Orlando resident who works in the field of electrical engineering. He always strives to ensure his home and his friends’ homes are up to par, but naturally can’t do it all himself. For those issues he can’t assist with he highly recommends the services of Bob Heinmiller, who handles AC and electrical services. You can learn more about Oscar by visiting him on Google+.